“Charade” is a light Hitchcockian thriller with two of the most charming stars to ever grace the screen. A lively screenplay, a catchy title song that you cannot get out of your head and a superb cast of supporting actors, most of who would soon go on to become stars in the late 1960’s and beyond.  Directed with a light touch by Stanley Donen, best known for his wonderful musicals with Gene Kelly (Singin’ in the Rain, On the Town and It’s Always Fair Weather) and without Gene Kelly (Funny Girl, Seven Brides for Seven Brothers and Pajama Game) glides elegantly and smoothly into the world of The Master of Suspense. Donen actually complained about the comparison to Hitch, claiming that Sir Alfred did not have a monopoly on this kind of film. While he is right about that, there no denying the similarities. First, you have the main character Reggie (Hepburn) being accused of something, she knows nothing about (the whereabouts of stolen money). Then we have a script filled with dark humor, another Hitchcock trademark and finally Miss Hepburn’s co-star, Cary Grant, a Hitchcock alumnus with an outstanding record.

Audrey Hepburn is Reggie Lampert, a UN Interpreter, whose husband is murdered and tossed off a moving train right at the start of the movie. His only possession is a small travel bag that the police will return to her. Just prior to learning of  her husband’s death, whom she was planning to divorce, she meets the charming Peter Joshua (Cary Grant) at a ski resort. They are attracted to each other. At the funeral palor where her husband’s body is on view, an assortment of odd strangers appear, each one substantiating personally that he is dead; one even sticks the deceased with a pin to ensure he is really dead. 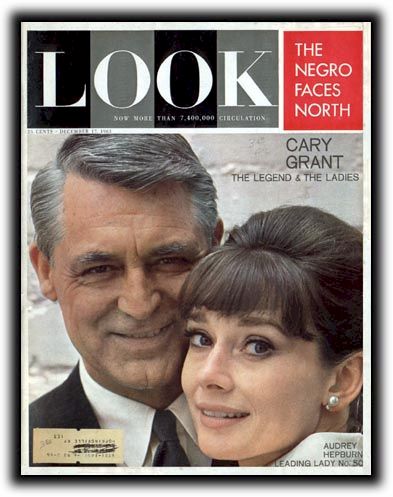 Soon after, Reggie is requested to come to the U.S. Embassy where she meets Hamilton Bartholomew (Walter Matthau), a CIA agent who informs her that her husband was involved in a robbery during World War II, stealing two hundred and fifty thousand dollars, belonging to the government. Hamilton shows Reggie a photo of three men who were in the Army with her husband and were part of the gang that pilfered the dough. Reggie recognizes the men; they are the same three strangers who came to her husband’s funeral. Bartholomew wants the government money back though Reggie insists she does not have it nor know where it is.  Peter Joshua reappears willing to help Reggie anyway he can to find the money, which he eventually admits he wants for himself. He also informs her that his name is really Alexander Dyle. Soon bodies are dropping like the proverbial fly. Reggie and Peter/Dyle fall in love as they continue to search for the missing money. I won’t reveal the ending but suffice it to say most of the characters are not who they say they are, maybe. 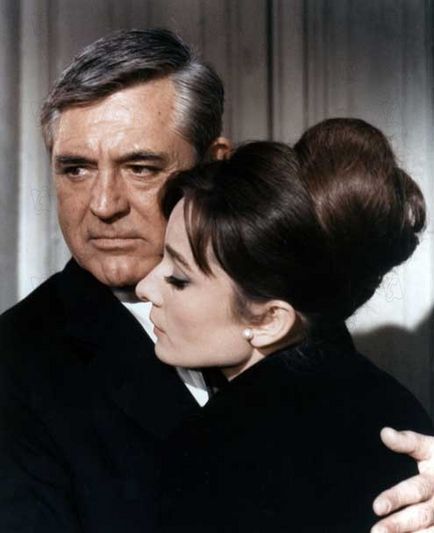 The film is filled with twist and turns, and plenty of sophisticated and sometimes ghoulish humor, courtesy of screenwriter Peter Stone. Grant is in familiar territory having covered this type of film with Sir Alfred many times before (North by Northwest, Rebecca, and Notorious). He is charming as ever, even if he is looking a touch older. Grant was concerned about the romantic angle of the script due to the age difference between Hepburn and himself. He requested changes in the script, specifically that they make Hepburn’s character the aggressor in their relationship. Hepburn always seemed to be involved with older men in many of her films (Cooper, Bogart, and Astaire) and it always looked a bit uncomfortable except with Grant who is able to carry it off unlike the others. Despite their age difference, Grant and Hepburn have a magical chemistry working between them. They are perfectly matched. Hepburn is beautiful and sophisticatedly sexy as one could be. There are no two actors today who glow with  the appeal, the sophistication, the style these two stars radiate. They had faces then and charisma. 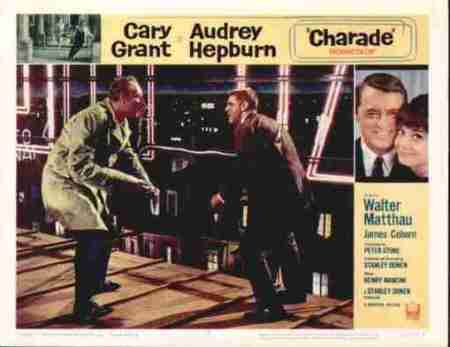 The film’s list of supporting actors is nearly a who’s who of future celluloid stars. Walter Matthau, who already had a long career in supporting roles would soon break out, win an Academy Award for his role as Whiplash Willie in Billy Wilder’s “The Fortune Cookie” and become the oddest of leading man. Here he is perfect as the underhanded “CIA Agent.”  Like Matthau, James Coburn had been slowly building a resume of wonderful character parts, one of which is in this film, and he would soon reach stardom with the “Our Man Flint” films. The great George Kennedy would soon become best known for his role as “Dragline” in the classic “Cool Hand Luke.”   The cast also includes the wonderful character actor Ned Glass best known for his role as Sgt Pendleton in “The Phil Silvers Show” (aka Sgt. Bilko). Finally and certainly not least is Henry Mancini’s wonderful score and title song, which is eerily played throughout the film and an integral part of the film’s success.

“Charade” was Radio City Music Hall’s Christmas attraction in December of 1963 opening to mixed reviews though the public came in droves. In 2002, Jonathan Demme, made a valiant attempt to remake this light classic called, “The Truth About Charlie.” Unfortunately, Mark Wahlberg is a long distance away from Cary Grant and though the beautiful Thaddie Newton comes somewhat closer to capturing the elf like sophistication of Hepburn, the film remains okay to watch but it is “Charade” you will come back to watch again and again.

You may notice on IMDB, they say the screenplay is based on a story (The Unsuspecting Wife) credited to Peter Stone and Marc Behm. If you check out the photo of the paperback above it states, “A novel by Peter Stone.”  On the inside of the book, it reads that it is dedicated to suspense writer Marc Behm. So what goes on here? Stone is a playwright and a screenwriter and he is not known to have ever written a novel. The “novel” is a novelization of the screenplay and “The Unsuspecting Wife” was a short story by Stone that originally appeared in Redbook magazine. The most likely scenario of the credit to Behm is he wrote the novelization based on Stone’s screenplay thus, the dedication to give Behm credit.